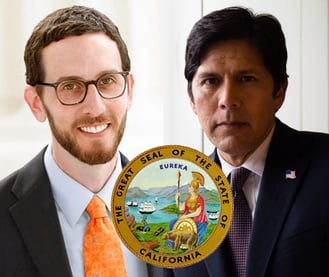 Wiener is seeking to merge his bill with SB460, senate president Kevin de León’s (D-Los Angeles) bill that passed the state senate this January. de León’s bill was the first bill introduced after the FCC repeal and garnered wide support. SB460 prohibits “paid prioritization, or providing preferential treatment of some Internet traffic to any Internet customer.” It also prohibits Internet service providers (ISPs) from hindering their customers’ ability to “select, access, and use broadband Internet access service or lawful Internet content, applications, services, or devices of the customer’s choice.”

While Wiener says SB822 “covers a wider range of behaviors and uses, a broader range of tools to get ISPs to adhere to net neutrality,” merging the bills would create the most detailed state bill protecting net neutrality policies to date.

If that’s not enough, Wiener provides for other hurdles in SB822 to keep ISPs in line. ISPs not adhering to the bill won’t be awarded state contracts and would lose billions in revenue; if they renege at some later date, they will be required to refund contract payments. The bill even calls for punitive action for those who don’t comply: ISPs with cable TV could forfeit cable franchises; their executives could be charged with perjury of net neutrality rules.

The bill does not seek to have the California Public Utilities Commission (CPUC) regulate ISPs as a public utility. Wiener states that, “The one thing that a lot of people agreed on, from the ISPs to the Electronic Frontier Foundation to a number of my colleagues, was that we don’t want the [CPUC] to become the ground regulator of the Internet.”

State bills protecting net neutrality challenge the FCC's revocation order abolishing net neutrality regulations. The FCC maintains that its order preempts any state effort to create its own net neutrality policy. If Wiener’s bill passes Legislation and is signed into law, California will undoubtedly face an FCC lawsuit. Wiener’s answer: “…the federal agency [FCC] lacks that authority and the state has the legal right to protect the interests of consumers in California.”

Along with net neutrality organizations Fight for the Future, Demand Progress, and Free Press Action Fund, and companies including Reddit, Netflix, Etsy, Vimeo and Twitter, Digital West is dedicated to fighting and advocating for a free and open Internet. Join the Battle for the Net.